There's a lot here, so please read to the end! Included in this update:

Our Bargaining Team was at the table until 8:30 last night. We were working on a new package that Catholic Health presented at about noon yesterday. The proposal does have improvements in it, but we are still not where we need to be. If Catholic Health truly wants to reach an agreement, they will have to put additional money on the table.

We are continuing to have discussions over health insurance co-pays. Catholic Health would like more members to utilize Catholic Health Infusion Center (Transit Rd, Depew).  We haven’t reached an agreement on this, but we’re having productive dialogue to see if we can come to an agreement.

Catholic Health continues to push for six separate contracts. We’re not backing down on a master contract.

We continue to remain focused primarily on wages and staffing. There are still too many people red-circled. Keep in mind that we’re working with totally new wage scales for everyone, all of which must be calculated - where a person is placed on the new wage scale, what their wage increase would be. With management’s new scale, some of the people who are most senior would get 3% lump sums instead of an increase on their base wage. That’s why we’re working so hard to make sure we eliminate lump sums as much as possible.

On staffing, despite bargaining progress, important issues remain unresolved.  For example, we are still apart on penalties that ensure management meets our staffing ratios.

Health Insurance Coverage During the Strike

We’ve had questions about whether CHS will end our health insurance coverage beginning November 1st. As of now, we don’t know whether or not they plan on doing that.

If our health insurance is cut off, don’t worry! Part of what the CWA Member Relief Fund is for is to cover our healthcare during the strike if the employer cuts us off.

If insurance does stop, we ask you to do the following:

If you have any concerns about your financial situation - getting bills paid on time, getting groceries, etc - please come to the union hall to speak with someone on the Community Service Committee. We have several forms of assistance available, and we want to make sure that no one faces any serious financial issues.

Many Strike Pay Checks Have Not Been Picked Up

We still have a bunch of checks from last week that have not been picked up. As a reminder, your check will NOT be mailed to you. You must come to the office (821 Elk St) to pick up your check.

1133 member Jill put together a list of answers to Frequently Asked Questions, including questions related to bargaining, PTO, health insurance, and strike funds. You can find it on the SafeStaffingBuffalo.org website here.

This commercial began airing on TV this morning! We’ve heard from people who saw it during morning shows including CBS This Morning and The Today Show.

This video will be running in paid online ads over the next few days.

Coming Up This Week

“Tailgating” on the picket lines on Thursday! Since Catholic Health seems to think that our morning shift picketers cooking pancakes on the line is considered “tailgating,” we decided to show them what tailgating really is. Our CWA sisters and brothers from Local 1168 took up a collection to sponsor a Picket Line Tailgating at the MACC and Mercy. Times are still being confirmed, but will likely be around 5pm at the MACC and 7:30 or 8pm at Mercy.

Halloween Party on Saturday - Join us from 2pm until 4pm for some Halloween fun with our families, including games, candy, hot chocolate, face-painting, and more!

On the Picket Lines (and Elsewhere) Over the Last Few Days

PEF Convention and Donation: Four of our members - Shelby, Jen, Melissa, and 1133 Exec Board Member Kevonna - spoke at the Public Employees Federation Statewide Convention yesterday in Niagara Falls. PEF represents an incredible body of public employees in New York State, including 10,000 healthcare workers, so they know our fight for safe staffing and patient care.

PEF President Wayne Spence invited our members to address the 200+ Delegation to talk about what our strike is all about, and afterwards, President Spence asked his members to pass the hat and take up a collection for our Solidarity Fund - and within just a few minutes, the amazing PEF members collected over $4,000! 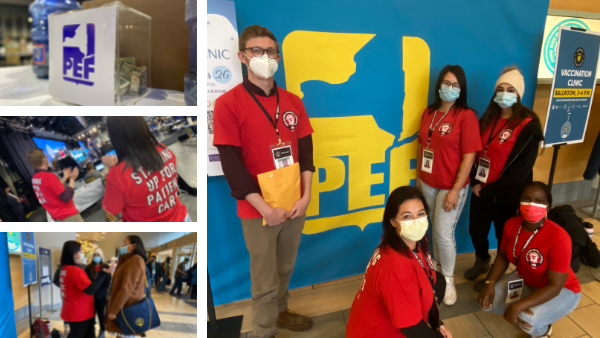 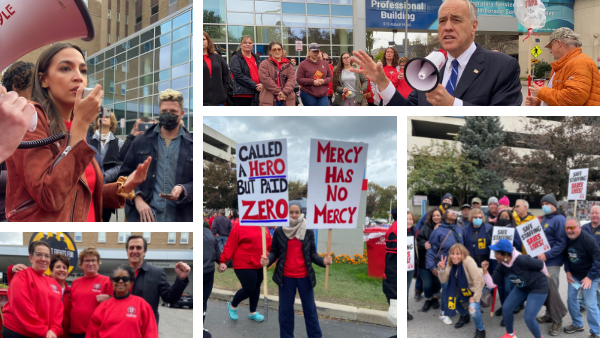